you are here: home » about us 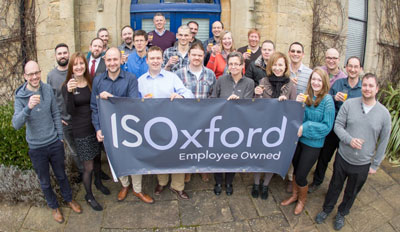 About IS Oxford ltd

"To bring high quality software and services to the library market. To understand the needs and aspirations of all our customers and employees and to treat them all with the same level of care and commitment. To employ people with high integrity who have a natural desire to support customers in the best possible way"

IS Oxford is a British company with a specific focus on library management software and services. In March 2016 we became an employee-owned company, which we strongly believe brings great benefits to our customers as all our staff are fully invested in the future of the company and looking after our business. We have served the library community for almost 25 years. We have been in our current home, the Chapel on the outskirts of the city of Oxford, for eighteen years.

We believe in ethical business practice and resist many of the traditional attitudes to running a company. We are committed to reinvesting a large proportion of our income in the future of the company and our customers. IS Oxford's team contains people of high integrity, prepared to do the right thing for customers, even if that means inconveniencing themselves. We think that a company is much more than just a money-making machine for our shareholders. We endeavour to put something back into the community in which we work, not least by supporting various charities. 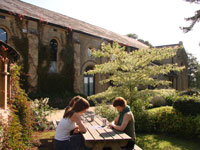 One feature that we believe distinguishes us from our competitors is that we continue to develop Heritage (and now Heritage Cirqa) rather than periodically replacing it with a new product. Upgrades are included in our support and this continuity means that the knowledge and experience of users, and our support and training teams, are not undermined by having to implement radically different software.

IS Oxford began life as Logical Choice in 1982. One of our earliest projects was the Bookshelf Library Management System. Bookshelf was written as part of a British Library research project, in collaboration with the Cairns Medical Library, at the John Radcliffe Hospital, Oxford University, England. Two years later a PC version of the system, Bookshelf PC, was released to take advantage of the movement towards affordable PC hardware and networks. 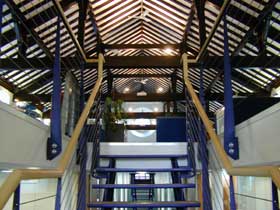 In 1991 Heritage was released as the successor to Bookshelf PC; it quickly became seen as the perfect solution for libraries which needed strong functionality (as seen in large systems) but at an affordable cost.

1994 marked major changes in both the product and the company. A new company was formed which allowed the Heritage team to focus on Heritage alone and a major upgrade to the system provided the means to go and tackle the needs of larger establishments. Heritage continued to make substantial inroads to the library market with over seven hundred sites established by the beginning of 1997.

Summer, 1997 marked the next generation of Heritage with a completely rewritten version to take us and our users into the next century. The last major release of Heritage, Version 4.2, was released in July 2004 and included a complete rewrite of the circulation module, a brand-new reporter and enhanced multi-site functionality.

In April 2012 we released Heritage Cirqa. This new version offers all the functionality of the mature Heritage system, but is deliverable via the internet. It enabled us to offer our customers a fully-managed hosting service, which has proved incredibly popular. As with standard Heritage upgrades, this new version was free to all customers with Heritage Online and a valid support contact.

Heritage Online, the accompanying browser-based OPAC, continues to be developed, and we are currently working on a new API and a variety of apps.

IS Oxford are committed to the continuing evolution of Heritage Cirqa - to date well over 100 man years of development work have been dedicated to it; our future plans will keep our team busy for many years to come!

Whilst we are committed to ensuring Heritage Cirqa will continue to satisfy the current and emerging needs of learning resource centres, we also believe that it is in the finer detail that differences between systems are found. Our ongoing developments might well be those which a procurement team are looking for, but we believe that the day-to-day operation of a system is what will be of primary importance to the staff that are actually going to have to use it.

We believe that the careful design of Heritage Cirqa, with its clear, uncluttered layout and ease of navigation between modules, gives it an edge over our competitors (and we know our customers agree with us on this). We have added small features throughout the system that make the lives of library staff that bit easier – shortcut keys, configurable defaults, customisable menus and forms – as well as facilities such as the Event Scheduler that are designed to minimise the time spent on routine administration.

We have also added such features for the users as well – the OPAC screens are very attractive, and features such as the 'favourites' facility where lists can be created and shared with peers, make Heritage Online a pleasure to use.

IS Oxford are primarily interested in the support and development of Heritage and Heritage Cirqa – this is evidenced by the number of employees in each department: four fifths of all staff in support, development and training. In addition to our own research, customer feedback is very important to us – all suggestions for enhancements to Heritage Cirqa are logged and reviewed when setting out the specifications for upgrades. We have spent many years building an enviable reputation in the library community and intend to maintain it long into the future! 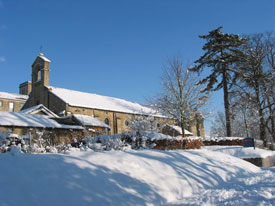 1999 was a year of change for IS Oxford: we outgrew our old premises in Oxford and moved to our new home, the Chapel. This was a very significant move for us as it encapsulated our maturing into a long established professional organisation. We also changed company name from the rather unwieldy 'Inheritance Systems' to IS Oxford.

IS Oxford is committed to the principle and practice of equal opportunities. We aim to be an equal opportunities employer. Our employment policy aims to ensure that no job applicant or employee receives less favourable treatment on the grounds of sex, marital status, ethnic origin, disability, age, class, colour, creed, HIV/AIDS status, personal circumstances, sexual orientation, or any other grounds which are unjustifiable, in terms of equality of opportunity for all. Entry into employment and subsequent progression will be determined only by personal merit and the application of criteria which are related to the duties of each particular post.

We support a number of charities, mainly through our Christmas staff giving scheme but also local ones when funding allows. Our Advent Calendar also raises money for several charities as a result of customer visits.